The 4 Hidden Dangers of Electricity on Your IT Network 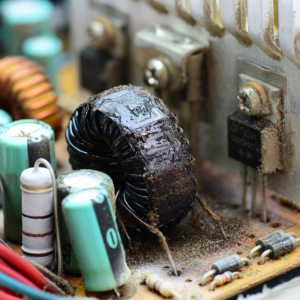 Is your computer plugged in? Do you use a power strip with a surge protector? If so, you are a heartbeat away from disaster and don’t even realize it.

Believe it or not, the same electricity you depend on to run your computer and network is also one of the biggest threats to your equipment, system, and the data it contains. Here are four computer power problems you must know about—and an easy way to prevent them.

1)  Transients – Commonly known as surges and spikes, transients are caused by lightning storms, wind, squirrels shorting out power lines, auto accidents, etc. Electricity travels up the power cord into your computer, damaging everything from power supplies to motherboards. This can happen several times a week.

Conventional wisdom says use a power strip with a surge protector and you are safe. As usual, conventional wisdom is dead wrong. After several months, these surge protectors have been zapped again and again by the surges of electricity they were designed to protect against and become useless. And most low-cost power strips with circuit breakers are designed merely to prevent a fire in case of a short; they do not respond quickly enough to prevent damage to your computer.

2)  Blackouts – Whether momentary or prolonged, a sudden loss of power can corrupt your PC to the point of not being able to start up again when the lights come back on.

3)  Sags – Have you ever seen fluorescent lights flicker for a moment? Then you have witnessed sag—a moment when the power drops below normal levels. More common than surges, electricity sags are caused when air conditioners, water heaters, printers/copy machines and similar equipment are turned on or come out of sleep mode.

A typical small office will experience 30 or more sags each day. Sags cause many of the weird and unexplained problems computer users regularly complain about, such as random computer hangs or network disconnects.

4)  Noise – Have you ever been watching TV and seen fuzzy pictures or white lines or dots when you turn on a blender or vacuum cleaner? This is the result of electrical noise. While a fuzzy TV picture is an annoyance, electrical noise also causes many computer problems such as loss of data.

So how do you protect yourself from the problems that can be caused by electricity? The most simple and inexpensive solution to all four of these hazards is a battery backup. The battery backup (also known as a UPS, or uninterruptible power supply) senses when there are problems with the power and automatically switches to the battery.

The better battery backups also condition the incoming power. As we’ve mentioned, power generally contains noise and fluctuates regularly. A good quality battery backup runs all power through the batteries, filtering out the noise and stabilizing the voltage—resulting in clean power that protects your computer from damage and data loss.

Choosing the correct battery backup for your computer or server can be tricky. Having one with a battery too small is the same as having none at all. For most desktop computers, a battery backup with a 500VA or larger rating should be sufficient to keep you going through momentary power problems.

Protecting your server from the dangers of electricity requires detailed knowledge of the server functions and power consumption. This will help you to pick the right battery backup solution. It’s also just as important to protect your network switches, routers and phone system with a battery backup as well.

The technology professionals at James Moore can help you weed through the technical details and find the backup solution that works for you.

Just a friendly reminder that registration is open for James Moore’s Nonprofit CPE Series! We're already seeing a great response, and we want to make sure you don't miss out on this prime opportunity for free continuing professional education credits. http://CVSoci.al/9~1KND7G

Companies looking to reduce their #tax bills or increase their refunds shouldn’t overlook the #FuelTaxCredit. We’ve explored the potential savings and how to go about claiming this often-overlooked tax break. http://CVSoci.al/DhTeNFvi

Stop by our table at the #UFCareerShowcase to talk about your #accounting career and the variety of opportunities available at James Moore! While you're here, enjoy games, prizes, cookies, and fancy socks! @ufcareercenter @ufwarrington #JamesMooreLife

You don’t have to wait for the Florida Cybersecurity Act’s mandated training program to protect your organization against hackers. Watch as Curtis McCallister details steps you can take now to beef up your #cybersecurity efforts. http://CVSoci.al/3mEUzotP